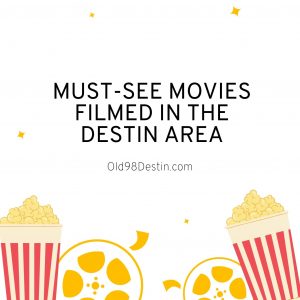 The Emerald Coast is more than a dream destination for those looking to escape to paradise. The scenic coast, breathtaking communities, and prestigious military bases have played an influential part in Hollywood and entertainment. Hollywood stars have flocked to our beautiful coast over the years for their vacation getaways. Luke Bryan, Britney Spears, Tim McGraw, and Keith Urban are just a few known residents to the area. With the Emerald Coast being such a picturesque destination, it is no surprise that it became a staple in many Hollywood movies.

Here is a list of our favorite movies filmed in the Destin area:

The Truman Show is a 1998 American drama film starring Jim Carrey.  The film follows the life of Truman Burbank, a man who grew up living an ordinary life that—unbeknownst to him— his life is far from reality. Unknowingly, Truman’s life is just a big episode of the actors participating in a TV show about him.

Director Peter Weir searched resort towns along the West Coast with nothing satisfying his dreamlike vision for the film. At last, Weir found the perfect filming location in Seaside, Florida. Seaside is an iconic one-of-a-kind town, widely known for its pastel-colored beach homes, New Urbanism architect, and sugar-like sand on the beaches.

Here is a list of Seaside filming spots that you can still visit today:

Have “galeophobia”? (Also known as “a fear of sharks”). If you lack galeophobia or are looking for an enthralling movie to watch before you head to the beach, check out Jaws 2. Jaws 2 is a 1978 American horror thriller film, about (as I am sure you guessed): sharks. The film is a follow-up to Jaws. A great white shark appears to lurk the waters after attacks took place on two scuba divers and a water skier. The police chief must protect the citizens and water after the shark terrorizes the water.

Most of the filming took place at Navarre Beach due to the beautiful weather and the waters depth being appropriate for the shark platform. The film also shot at Hog’s Breath Saloon on Okaloosa Island. Hog’s Breath Saloon eventually relocated to Destin where it resided up until 2020. Unfortunately, Hog’s Breath has since closed down.

Do not let this movie stop you from soaking up the panhandle waters! The chances of being attacked by a shark (let alone killed by one) are minimal compared to other hazards faced day-to-day.

Eagle Eye is a science fiction action-thriller film starring Shia LaBeouf and Michelle Monaghan. Two strangers are forced to go on the run after an unknown woman threatens their family and livelihood. The woman uses technology to control and track their everyday life, making it hard for them to escape her. Hold on to your seats, this captivating movie will keep you on edge!

While a large portion of the movie filmed across the country, memorable scenes were filmed at Eglin Air Force Base in Fort Walton Beach. Eglin Air Force Base has become a common backdrop for military-themed movies over the years. Eagle Eye, Twelve O’Clock High, and Transformers 3: Dark of the Moon, are just a few movies with scenes filmed at the base.

Ruby in Paradise is a life affirming movie starring Ashley Judd. Ruby relocates her dead-end life in the Midwest to the Florida Panhandle, finding herself in Panama City, Florida. The plot follows the life of Ruby, as she tackles transitioning into an independent adult.

Florida native Victor Nunez, directed this movie in hopes of capturing the essence of Florida culture. Filming took place in Panama City Beach. The movie captures the off season streets of Panama City Beach, and the beautiful sunsets over the ocean.

There are many more movies filmed here in the Destin area! Which one is your favorite? 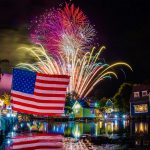 HOW TO CELEBRATE THE 4TH OF JULY IN DESTIN 2021 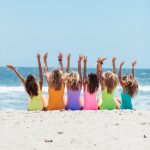 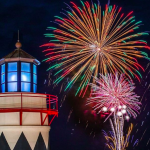 Memorial Day Weekend is the unofficial start to summer in Destin, so it’s no surprise that there are tons of 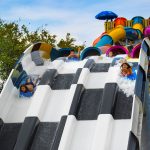